ElasticSearch (ES) is a noSQL JSON (not only SQL JavaScript Object Notation) database. Its primary application is to store logs from applications, network devices, operating systems, etc.  But it is suitable for the storage of any kind of JSON document.  So, you could use it instead of, for example, MongoDB.  Yet, MongoDB has native support for JavaScript, as we explained here, which you will find useful.  ES does has not such a REPL (read-eval-print loop) command line interface, except for Curator, which can be used for admin functions.

In this guide we will cover the most important ElasticSearch topics.

But first it is necessary to understand what a JSON database is and does.

What does JSON and noSQL mean?  Traditionally, databases store records in tables in columns.  That is called a relational database (RDBMS).  The most widely-known example of this is Oracle, invented in the 1970s from a paper written by IBM, a product that has made Larry Ellison quite a rich man and a product that gave him a monopoly for many years.  (There are open source alternatives, like MySQL.  But what do monopolies do?  They buy up the competition.  Oracle has bought MySQL.)

Data stored in an RDBMS is put together in a join operation and the data is normalized in most cases.  As an example of this, consider an inventory system.  You have products and then a table of inventory movements (sale, stock, loss, etc.).  So, you would probably store these in two separate tables, like this: 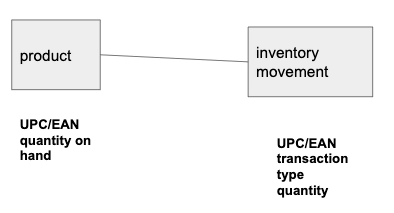 The common elements upon which you join the two are the UPC/EAN numbers (Universal Product Code and and European Article Number.) Those are the barcodes scanned at the grocery store. The product keeps the inventory count. The inventory movement table keeps the sale, receipt, loss, and other transactions on hand.

Instead of doing joins, the JSON database embeds documents inside each other, like shown below, where the transactions are inside the product document.

It would do not much good to dump logs in their native format into ElasticSearch since you could not query them in a standard way.

You turn that into JSON using the ElasticSearch tools Logstash, Grok, and Filebeat.

If you work with a JSON database then it’s important to know its APIs (Application Programming Interface). Because it uses APIs, this means you can talk to it any with programming languages. And because there are SDKs (Software Developer Kit) too you can talk to it with specific programming languages. The difference is that APIs work over HTTP and HTTPS, meaning there is no need for a direct connection to the system over a port that is perhaps not open. Additionally, APIs are limited to the operations GET, PUT, POST, and DELETE.

And then query that with:

And you can do all of that with the Kibana graphical interface as well.

Note: of the last example purists would say is not logical since the GET operation does not take body (i.e., the -d) parameters. However, ElasticSearch says it does, since the RFC spec for web operations says so.

So, buckle in as we take you through ElasticSearch. It’s going to be a wild ride.