Node.js has a “JavaScript everywhere” motive to ensure JavaScript is used on the server-side and client-side of web applications and Django has a “framework for perfectionists with deadlines” motive to help developers build applications quickly.

They are being implemented in a lot of big projects, they have a large user community, and are being upgraded on a regular basis. The quality of both tools leaves developers feeling confused as to which tool to choose for their projects. The article aims to clear the air and help you make a decision.

JavaScript is known mainly for its strengths in client-side development, but Node.js is doing the exact opposite by working wonders on the server-side.

Node is an open source JavaScript runtime environment which was written in C, C++, and JavaScript, built on the Google V8 JavaScript engine, and released in 2009. Node.js is based on an event-driven, non-blocking I/O model.

Node can be installed on Windows using the Windows Installer. Installation is simple and can be done just by following the prompts after downloading the installer from the official website.

Successful installation can be confirmed from the Windows command prompt or PowerShell with:

For Linux (Ubuntu) users, Node.js can be installed from the terminal with:

Successful installation on Linux(Ubuntu) can be confirmed on the terminal with:

The Node Package Manager (npm) is used to install packages to be used with Node.js.

Django is a very robust open source Python web framework. It is very high-level, as most of the low-level stuff has been abstracted out. It is known for having a “batteries included” philosophy, therefore it’s ready to be used out-of-the-box.

Quick development projects are possible with Django and it’s beginner friendly for people who have an understanding of Python already.

Django was built and modeled on pragmatic and clean design and comes with all the major components needed in building complex web applications.

Installation is very easy and can be done using Python’s package management tool, known as pip. From the terminal, the command below is all that is needed for both Windows and Linux operating systems, provided pipis installed.

To confirm its installation, simply activate the Python shell and import Django. Type in “python” in the terminal like:

If there are no errors, then everything worked fine.

Both Are Open Source

Node.js and Django are both free to use. You will not face any licensing issues when using either for commercial software. They are also open source, so you can contribute to the projects when you find a feature or bug to work on.

Check out the Node.js repository and Django repository.

Node.js is a JavaScript runtime taken out of the client-side browser environment and Django is a Python framework. To be able to learn either tool, you would need to be comfortable with working with their primary programming language.

To work with Node.js, you need an understanding of asynchronous programming, Node’s native methods, and architecture.

There are lots of tutorials online for Node.js, however, lots of examples are bad and that could make learning much more difficult.

While there are lots of good tutorials for Django on the web, you’ll find there are a large number of outdated ones teaching the old way of doing things.

While learning Node.js and Django requires knowledge of their base languages, Node introduces some complex concepts that makes it a bit difficult for beginners as compared to Django.

Node.js is simply JavaScript taken outside of the client-side browser environment. Therefore, it’s syntax is more like regular JavaScript syntax.

Here is a ‘hello world’ app in Node.js:

Django is built on Python, therefore it uses Python syntax too. “Hello world!” in Python would simply be:

However, since Django is a framework it forces you to use a particular structure that identifies with the MTV pattern, so we would need to write different scripts to produce “Hello World” on the web app.

Here’s a look at the basic views.py file for Hello World:

And here is the urls.py file:

Node.js applications can be scaled by using the cluster module to clone different instances of the application’s workload using a load balancer. But due to Node.js working with single threads, it performs poorly in CPU intensive conditions.

Django is highly scalable, as the caching of applications is quite easy and can be done using tools like MemCache. NGINX can also be used to ensure that compressed static assets are served, and it can also be used to handle data migrations successfully even as data becomes more robust.

Node.js and Django both have large user communities. The primary factors for this is that developers are taking advantage of a server-side flavor of JavaScript to work on the backend of web applications for Node.js and taking advantage of Python’s easy to use syntax for Django. There are lots of tutorials online related to Node JS on the web when compared to Django, with more companies implementing Node as their backend web technology. 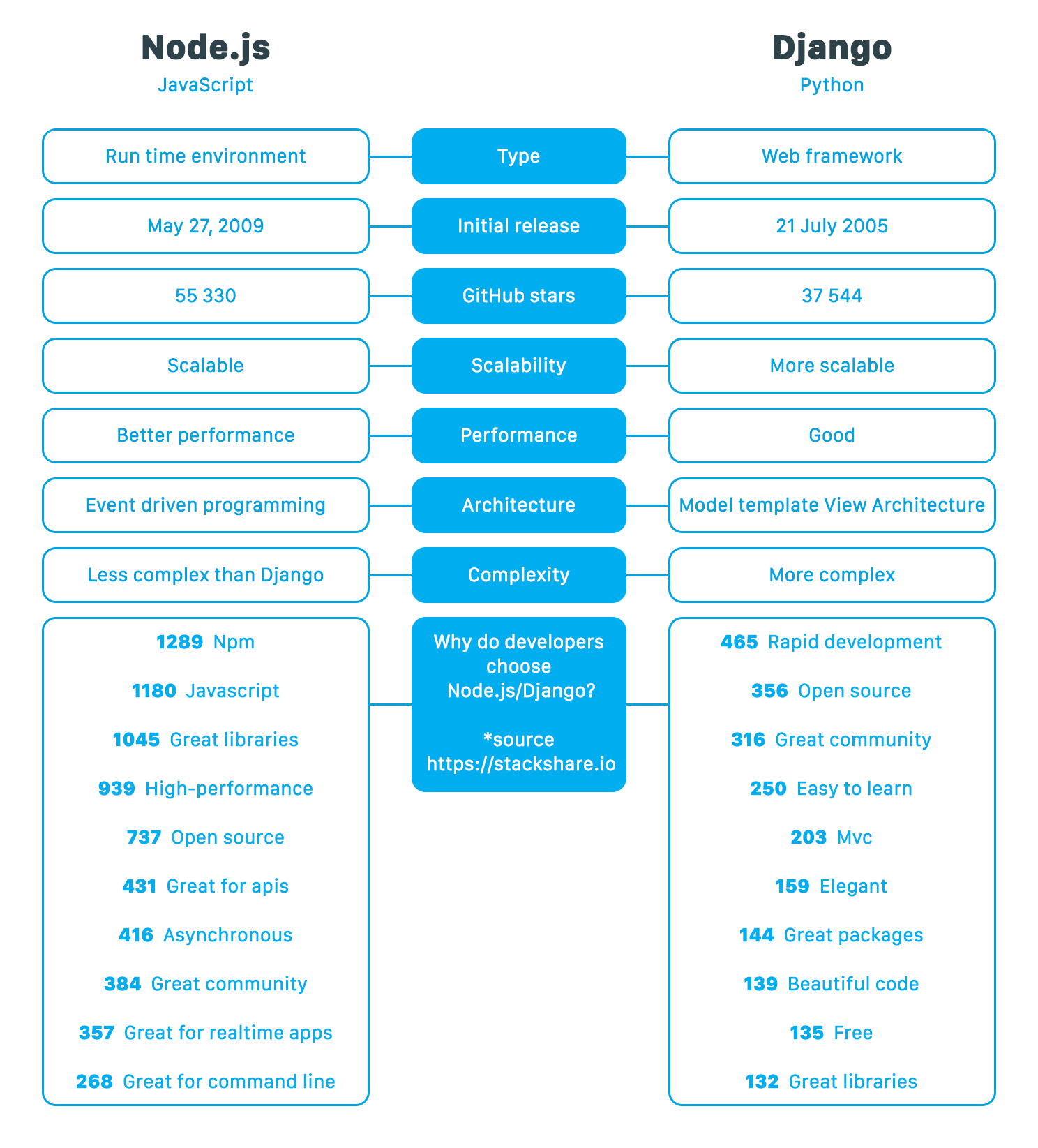 Both tools are great for building web applications, however, there are uses cases where each stands out.

Django, for example, is a great choice when you are considering using a relational database, a lot of external libraries, have security as a top priority on your list, and need to build the application quickly. Use Node.js when you have an asynchronous stack from the server, need great performance, intend on building features from scratch, and want an app that does the heavy lifting of client-side processing.

Choose whatever tool best suits your needs, both tools are powerful for web development.