Part I – The Basics
Part II – Subtyping
Part III – Wildcards
Part IV – Bounded Type Variables
In Part I we quickly explored the basics of Java generics. In this blog post we will explore how generic types behave in the Java type system.

In Java, as in other object-oriented typed languages, hierarchies of types can be built: 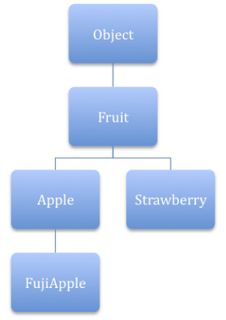 If a reference of an Apple instance can be assigned to a reference of a Fruit, as seen above, then what’s the relation between, let’s say, a List<Apple> and aList<Fruit>? Which one is a subtype of which? More generally, if a type A is a subtype of a type B, how does C<A> and C<B> relate themselves?
Surprisingly, the answer is: in no way. In more formal words, the subtyping relation between generic types is invariant.
This means that the following code snippet is invalid:
List<Apple> apples = …;
List<Fruit> fruits = apples;
and so does the following:
List<Apple> apples;
List<Fruit> fruits = …;
apples = fruits;
But why? Is an apple is a fruit, a box of apples (a list) is also a box of fruits.
In some sense, it is, but types (classes) encapsulate state and operations. What would happen if a box of apples was a box of fruits?
List<Apple> apples = …;
List<Fruit> fruits = apples;
fruits.add(new Strawberry());
If it was, we could add other different subtypes of Fruit into the list and this must be forbidden.
The other way round is more intuitive: a box of fruits is not a box of apples, since it may be a box (List) of other kinds (subtypes) of fruits (Fruit), such as Strawberry.

Is It Really a Problem?

But wait! If we repeat the argument exposed in the previous section, we might end up adding strawberries to an array of apples:

The code indeed compiles, but the error will be raised at runtime as an ArrayStoreException. Because of this behavior of arrays, during a store operation, the Java runtime needs to check that the types are compatible. The check, obviously, also adds a performance penalty that you should be aware of.

Once more, generics are safer to use and “correct” this type safety weakness of Java arrays.

In the case you’re now wondering why the subtyping relation for arrays is covariant, I’ll give you the answer that Java Generics and Collections give: if it was invariant, there would be no way of passing a reference to an array of objects of an unknown type (without copying every time to an Object[]) to a method such as:

With the advent of generics, this characteristics of arrays is no longer necessary (as we’ll see in the next part of this post) and should indeed by avoided.

In the next post we will see how generic wildcards introduce both covariant and contravariant subtyping relations with generics.